Today’s WordPress prompt is about your “travel style.” How convenient for someone who just came back from vacation!

I couldn’t really tell you what my personal travel style would be, seeing as I’ve never traveled alone. But it would probably involve a daily planner, a bazillion printed “google maps” sheets, and most of the stops would be restaurants.

Let’s be real, this is probably closer to what I’d be doing with my time.

But since I’ve been traveling often with the boyfriend, we’ve settled into a travel style of our own.

No one told me when we started dating, but it turns out my boyfriend has a secret life as a tour guide. While I can hardly remember what I ate for breakfast, he has an uncanny ability to memorize everything about a city he’s been to, including the history of basically every building, every plaza, every monument. Instead of gawking open-mouthed at all of the “pretty buildings,” I actually learn something valuable everywhere I go. And I know what to enter for the “photo location” on my Instagram photos, making me look super-cultured. Win-win-win.

Eiffel Tower, built for the World Fair. When it was first built, the Parisians thought it was such an eyesore that it was almost torn down. See babe, I listen!

I think I also have a secret life, or perhaps a secret past life, as a lemming. So while he is trying to show me around and give me a five-star tour of a city, I am following the person ahead of me wherever they are going, resulting in him constantly having to pull me in one direction or another to keep me from wandering off somewhere. I’ve told him repeatedly that I think it would be easier for both of us if I had one of those leash backpacks that parents give runaway children. After London and Paris, I think he’s considering it.

I think I could rock it.

A true tour guide always has a plan, and so he always has an itinerary of what we’ll be seeing. He maps out the best route to see it all, and he’s excellent at what he does. His expert planning allowed us to see all of Paris in a little over half a day, and still have time for drinks along the Champs Èlyseès. I saw NYC in a weekend. He took me to every notable location in DC in a day (this one, my feet have never forgiven me for). It’s impressive.

While we are efficient sightseers, there’s one thing I do not rush one bit, and that is the food. My boyfriend knows this. When it comes time to eat, I am usually the one who takes the reins, trying to scope out the best restaurant. I have a rule I’ve adopted from my boyfriend’s best friend: No eating at chain restaurants when you travel. And I stick to it. Unless in some sort of situation where time is of the essence, I refuse to settle on the food. On our last trip, this meant Brazilian barbecue, outrageously good dim sum, and macarons.

Me eating my first piece of actual French bread. “Pleeeease take a picture of me. Pleeeease.”

Dim Sum from Ping Pong, near the London Eye. Also known as a hidden gem/ the best lunch ever.

I like rides. This is a known fact. I won’t be posting a picture since I do want to get a job somewhere respectable someday, but my boyfriend says that I make this really funny happy face when I am on a “ride” (be it a boat, a train, whatever). He calls it “ride face.” Because you can’t deny a girl something that makes her so happy as to make this ridiculous face, our travels almost always include a “ride.” I’ve been on a river cruise down both the Potomac and the Thames. We took a ride on the London Eye. Our trip to Las Vegas included a tour of every major hotel rollercoaster (which provoked more crying than it did “ride face,” but that’s a story for a later day). 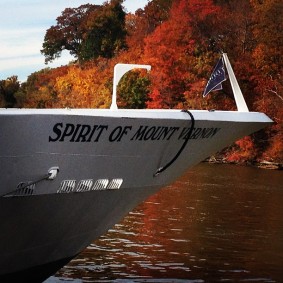 The best way to see the Potomac. Obvi.

And every adventure must include selfies. Lots and lots of selfies. While I’m sure the execution is a little ugly to the outsider, involving my boyfriend trying to scrunch down to half his height and get both of our heads and the scenery in the picture while I stand on my tip toes and try not to fall over, we make it work. I’m actually surprised someone hasn’t come up to us yet and offered to take a picture of us out of pity for the struggle. 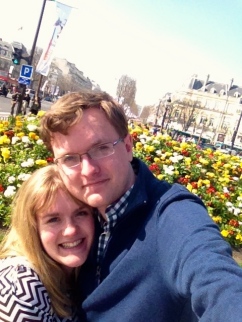 Selfie on the Champs Èlysèes. Necessary.

So that’s our travel style. There are lots of laughs, lots of good food, and usually at least one fall on my part. I never thought of myself as a “traveler” but I think it’s been one of my favorite parts of our experiences together, and I’m hooked.

What is your travel style? Can you relate? I’d love to hear about it.

Other excellent writings on the subject: